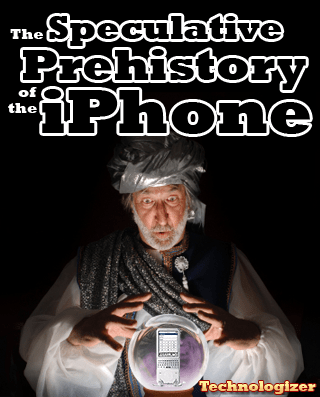 Harry McCracken’s Technologizer looks back to pre-2007 and the ridiculous amount of hype and — comical in hindsight — guesses (and photoshop concept art) as to just what Apple and Steve Jobs’ iPhone might turn out to be:

Remember the very first iPhone–the one that sold for $249, had an iconic click wheel, a cool slide-out keypad, and a unique two-battery design–and which ran on Apple’s very own nationwide wireless network? No, not the iPhone that Steve Jobs unveiled at Macworld Expo San Francisco on January 9th, 2007. It didn’t have any of those features. I’m talking about the one that was an ever-changing figment of the collective imagination of bloggers reporters, analysts, and others who wrote endlessly about the iPhone in the months before anyone outside of Apple knew much of anything–including whether or not the phone existed at all.

Flash forward and Michael Gartenberg on Engadget uses that article as a cautionary tale when it comes to Apple’s future, possible, universe dent’er, the iTablet (or iSlate):

A larger iPod touch or a small MacBook with a touch screen is simply not the next big thing for Apple — the goal is to appeal to 50 million customers, not 50 thousand. Perhaps that’s why there’s so much mystery: what we’re waiting for isn’t another failed ‘tweener device but something as different from what came before as the iPhone was to previous mobile phones.

Gartenberg also points out that, without even mentioning the existence of a tablet, Apple still owns all the mindshare in that space, even over real devices that have been announced and shipped.

That’s probably not by accident either.