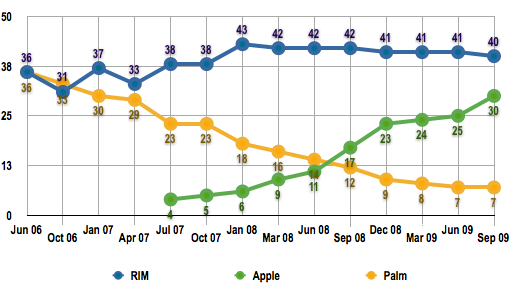 Paul Carton, Director of Research at ChangeWave Research, reported yesterday at investorplace.com that Apple iPhone is gaining steadily on BlackBerry’s market share, a great feat considering BlackBerry’s entrenched position in the business sector. iPhone market share is now a heady 30%, still behind BlackBerry’s 40%, but RIM products are not gaining new users at nearly the same rate. As for Palm? Well, the Pre seems to have leveled out the free fall, but there’s nothing terribly encouraging about the data. My guess is they are still pining for those halcyon days of 2006 when Palm was king.

The good news for Apple is that RIM’s stranglehold on the smartphone market appears to be loosening, and with so many consumers still to reach, Apple has the momentum. CNNMoney.com characterized Apple’s market gains as putting Apple within “striking distance” of BlackBerry. What’s driving the momentum? Customer satisfaction. Among those who plan to buy a smartphone within the next 90 days, 36% plan to buy an iPhone. And among current users, fully 73% of them are satisfied with the device, compared with only 43% of BlackBerry users.

Mr. Carton notes that BlackBerry is planning product launches this year, and Apple has already released the 3GS. If Apple holds true to its history, we won’t see a significant upgrade to the phone until next June. Either way, Apple has carved itself out quite a niche and the iPhone can no longer be dismissed as a toy to BlackBerry’s business device.

TUAWApple iPhone closing in on BlackBerry market share originally appeared on The Unofficial Apple Weblog (TUAW) on Wed, 28 Oct 2009 17:00:00 EST. Please see our terms for use of feeds.