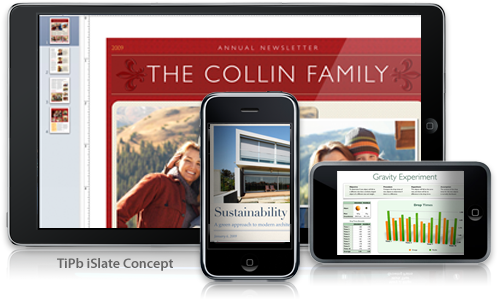 The Wall Street Journal “leaks” that Apple is negotiating with publisher Harper Collins over the rights to market e-books on Apple’s “latest creation“, presumably the iTablet/iSlate.

We say “leaks” because, well, it’s the WSJ and the story credits contributions from someone who’s been getting an awful lot of awfully good Apple information recently. Also, we’ve heard for a while now that Apple has been in talks with traditional print media book, magazine, and newspaper publishers in order to line up content for the iTablet — and presumably the iPhone, iPod touch, and other iTunes connected devices, since that’s Apple’s ecosystem and their forte.

So, on one hand this story serves to firm up expectations that a tablet style device will be announced, and set them as to what one of its new features will be — doing from print media what the iPod did for music (and what has tried to do for movies and TV, despite Hollywood’s myopia). Here’s the crux of it:

Brian Murray, the chief executive of HarperCollins, said in December that e-books enhanced with video, author interviews and social-networking applications could command higher retail prices for publishers than current e-books. Many of the country’s largest publishing houses are worried about the sale of new bestsellers for only $9.99 in the e-book format. New releases of enhanced e-books could sell for $14.99 to $19.99, a person familiar with the situation said. HarperCollins is a unit of News Corp., which also owns The Wall Street Journal.

What remains to be seen is, if these negotiations pan out, whether Apple will focus on print-media-gone-digital as the killer feature of the new device/service or just one of several (like the iPhone’s wide-screen ipod, internet communicator, phone combo pitch).

[Thanks to @jordanak1 for the head’s up!]

WSJ: Apple Talking to Book Publishers for iTablet (and iPhone?)