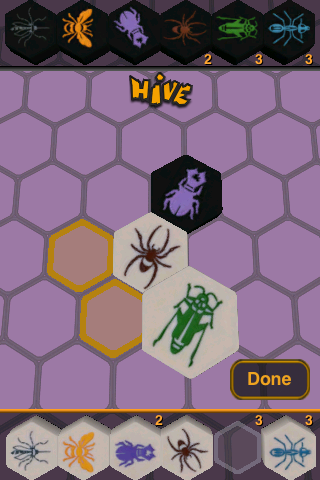 As a tabletop board game, Hive has been around since 2001. It draws inspiration from classic abstract strategy games like chess and shogi but does away with that pesky board (see also: Tile Chess). The iPhone/iPod touch app [US$1.99, iTunes link] brings everything from the physical version to your pocket, and if clever placement of bug-decorated pieces is your thing, the game is well worth the download – at least for a short while.

The rules of this two-player game are entirely simple. Each turn, you either add a piece to the hive (you can think of the hive as the board) or, if you’ve already placed your queen bee, you can move a piece in the hive. The object of the game is to surround your opponent’s bee and, like in chess, each type of piece (different kinds of bugs) has its own movement abilities, so knowing when to move where is a challenge and certainly part of the fun. Beetles climb on other bugs, the ant runs around the hive, and so on.The full rules are detailed in the app’s tutorial, or you can watch a video review after the jump (or get the rules PDF). Read on to discover if these bugs are the kind you want invading your iPhone.

A game of Hive goes pretty quickly, taking anywhere between five and 30 minutes depending on how good you are and what level you’re playing against. The app can save up to eight games so you’ll always have room for any game that gets interrupted.

Since Hive, like chess and many other abstract strategy games where all pieces and options are known at all times, is a game of perfect information, it works wonderfully as a two player app. In fact, if your tabletop board game shelves are already full of abstract games, there’s really no reason any more to shell out the $25 or $30 for the physical copy when almost the same functionality – with quicker set up – can be had for $1.99 in the App Store. Heck, just the 2007 Mosquito expansion costs $10 in a store. There’s no way an iPhone can replace an entire board game collection, but in this case, it makes more sense to have the app than the box.

While the app doesn’t offer a way to playing with multiple mosquito tiles, the game’s visual options are ridiculously varied. None of them make the game look quite as nice and the polyoxybenzylmethylenglycolanhydride (sorry, Bakelite) pieces available for tabletop play, but you can pick from about two dozen background colors and five different tile types. There are also four difficulty levels and toggles to to turn the mosquito option and tournament rules on and off and to select which color the AI will play in single player mode. We recommend leaving the tournament rules set to be always on. Tournament rules mean that neither player can place the Bee as their first piece, a choice that often leads to games that end in a draw. Boring.

The trouble is that the AI, even on hard, is not too difficult to beat. In the course of an evening, an experienced abstract game player can learn the rules and manage to beat the system with some regularity. It’s not a total cakewalk, but a difficulty level beyond “hard” would be appreciated. You know, something really frustrating. Considering the game’s mediocre AI, a real online player option would be a great thing. Instead, the pass-the-device two-player and local network P2P are all that’s offered. Of course, a harder-working AI might be a bit much for early iPhones. Running on a first-gen iPod Touch, the game repeatedly reported low memory and suggested restarting the device. Even after doing so, though, the message appeared. Still, the app continued to work, so it’s not the most useful of warnings. When playing the medium and hard AI levels, there is some – not too much – delay in the bot’s moves, which is kind of nice and mimics playing against a person, but it might become too annoying if the AI got smarter. Thankfully, the game’s music and sound effects can be muted and, if iTunes is playing when the app starts, the audio continues without interruption. Also, while there is no undo button per se, you can touch the “Hive” logo on the game screen and call up the game menu, which includes a “Back to Game” option. If you do this when you’re selected the wrong piece, the piece will be unselected when you come back to the game. Handy, but the location of the logo makes it kind of troublesome for one player in a two-player game.

All in all, Hive is like so many of the “easy to learn, hard to master” style of games. Even when playing on the iPod touch, having two human players is better than playing against the bots, and the game loses nothing in the translation to virtual tabletop.

Review of the board game version by the Dice Tower: Official app promo from Lotus Studios:

TUAWReview: Hive board game app offers all sorts of buggy fun originally appeared on The Unofficial Apple Weblog (TUAW) on Sun, 07 Feb 2010 19:00:00 EST. Please see our terms for use of feeds.