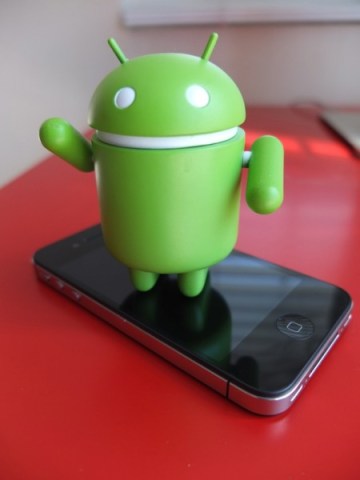 I read an article in Seeking Alpha the other day by an author that goes by the handle BlindReason. He made the argument that the iPhone has peaked because Apple products on average sell for more than 2.7 times that of the average PC cost. Huh? What do Macs have to do with iPhones? But I digress.

AppleInvestor member Gary Stein, alerted me a Business Week podcast that claimed for 2009 Apple had only 20% of US PC sales, yet at the same time Apple owns 90% of PC sales over $1,000. If that’s true, then Apple controls the only part of the PC market were there are profitable margins. So, it doesn’t take a rocket scientist to realize that Apple chooses to do business in the high-end and dominates there.

BlindReason’s next point was that early adopters “value a more controlled user experience,” because it allows them a more stable platform from which to build apps and “replicate Apple’s success.” But over time he said this success will wane, lasting only so long before people become antsy, wanting more choice, more hardware, more performance. And by keeping a tight grip on the iPhone, once the technology goes mainstream, it will choke the initial success.

So what Mr Blind is saying here is that once all the other manufacturers employ similar technology to the iPhone, the iPhone won’t have so much appeal, because there will be so many other choices out there, that the iPhone will be just another device.

Well, as far as I can tell, Apple has at least a two year lead on all other smart phone manufacturers. And Apple has the App Store which has no equal, and no one in sight to challenge this asset.

His final point on the demise of the iPhone, and apparently Apple as a whole, is that Apple failed in the early years with the Mac because they controlled the platform and stifled choice. And people wanted more, so they migrated to PCs. He concludes by saying that Android is equivalent to the PC of old. And that Android represents choice and openness, and therefore will eventually dominate not only the iPhone, but also “Blackberry, Symbian, Windows and Palm.”

There are so many things wrong with Mr Blind’s arguments, besides the fact that it’s rifled with logical fallacies. So rather than take each point to task, let’s look at the holes in this argument. Apple sells iPhones because the user experience that has evolved. And while Apple has exerted a fair amount of control over the evolution of the phone, they have managed to attract developers because of very favorable distribution terms, ease of development, and great APIs (application programming interfaces). The result… over 100,000 applications of every type. Sounds like plenty of choice to me.

The most striking thing Apple has done is break conventional wisdom. The wisdom that said a smart phone needs a user replaceable battery, or that it needs a chick-let keyboard to be a success. This is Apple’s biggest asset. Apple leads virtually all computer innovation, and now the same can be said for smart phones. This is Apple’s modi operandi, always has been, and as far as I can tell, always will be.