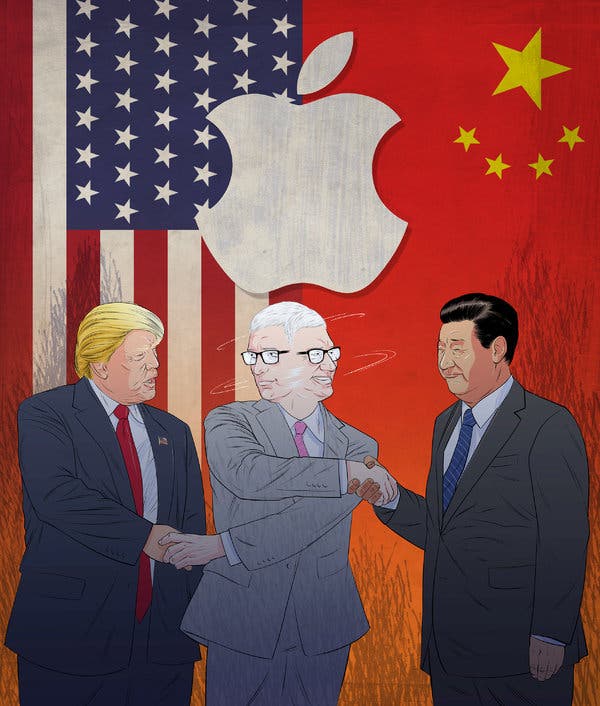 That’s pretty scary, because if this pattern plays out, there’s still a mountain of pain in store for long term investors of Apple.

There are other interesting TA details that I’ll point out on this annotated chart that may point to the HSP playing out. The first is this very large descending wedge that formed ever since Apple came off it’s high of 705 in September of 2012. A descending wedge is a consolidation pattern, which typically precedes a sharp reversal. Last week Apple broke out of this pattern, and it looked like the bottom was in, but then yesterday (Thursday March 28th) there was a huge down day, while the rest of the markets shot up to new highs. That can’t bode well for Apple in the near term, showing extreme weakness on no significant news.

The way you read these blue and yellow bars, is kind of stereotypical. Blue bars represent smart money, while yellow bars represent dumb money. Look at the top Apple put in last September. There’s a yellow bar just before the top, indicating retail traders pumping money into Apple, thinking the Sky is the limit. This is immediately followed by two blue bars, flanking the high price. The way I would interpret this is institutional traders taking huge profits, selling to all that dumb money, the retailers, then putting in place massive shorts just before Apple made that initial surge to the downside.

Now look at the attempted break away from the descending wedge from last week, it was capped with a huge yellow bar, that’s dumb money. Retailers thought the bottom was in, so they piled in with longs, thinking they have caught the bottom. My prediction is we’ll soon see a blue bar showing more smart money shorting Apple and driving it toward the 355 target.

Now, there’s no guarantee that a Head and Shoulders pattern will reach its potential. In fact Technical Analysis patterns sometimes work, sometimes they don’t. But they are a reflection on price action, and the patterns do have some historical validity, otherwise a lot of smart people wouldn’t be throwing their money into the pit without a reasonable expectation that they have an edge. On the other hand, 90 percent of all traders lose money, so take all this analysis with a good dose of skepticism.

I think Technical Analysis is more art than science, really just a big SWAG – Scientific Wild Ass Guess. I used to trade technicals, and will provide this type of analysis more as time goes on, as many professional traders consider my TA talents to be pretty good. The full disclosure is that I don’t own any Apple (AAPL) stock or options, and don’t plan on taking any positions in the near-term. I do however trade futures, but don’t trade market direction. Typically I trade highly correlated pairs in arbitrage situations. But that’s for a future post.