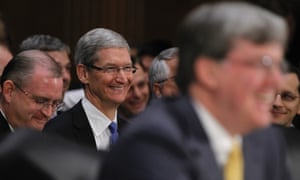 Well, we all know about Apple’s magnificent hoard of cash, and that most of it ($102.3 billion) is in overseas banks outside the reach of the US Internal Revenue Service. So, now members of congress, sensing a windfall payday and the chance to make hay on corporate greed, wants Apple’s CEO Tim Cook, to explain why he shouldn’t just hand over billions of dollars to the US Treasury.

These sleaze balls in Congress didn’t like the accounting jujitsu that Apple performed by issuing bonds to the iTune of $17 billion, which is debt by the way, something Congress should be quite familiar with, to pay shareholder dividends, instead of repatriating the cash from foreign banks, and thereby incurring huge taxes. Well, like that’s a big DUH! Apple did it because it’s legal, it’s their cash, and it saved them $9 billion.

Of course Congress doesn’t see it that way. What I mean to say is that they [Congress] don’t see that cash as belonging to Apple, they see it as cash that Congress is allowing Apple to hold for them, until they can figure out a way to repatriate it. I love that term repatriate, cuz it makes it sound patriotic to bring the cash back to the US where it “belongs.”

Now Congress is sure to make it sound like Apple, as well as other big multinational Internet companies like Google and Amazon, are all conspiring to launder revenues by slipping it out of the United States and depositing into super secret overseas bank accounts.

So, what is likely to happen is Tim Cook will go before congress, in a typical witch hunt style forum, where all the puffy senators and congress people that need to boost their re-election funds, will line up to …not really ask questions, but instead make statements that sound profound and egregious, designed to make Apple appear to be the epitome of American greed, and the congress people as the saviors of the American dream.

It is widely believed that Time Cook will make a statement, in a class action way, try to make the argument for a simplification of tax laws to make it easier for American companies to move their cash about, so they don’t have to use ninja accounting tactics. You know, ask Congress to be friendly to corporate America.

I’m sure these stuffed shirts already have a very elegant retort prepared for Mr Cook. Despite that they may appear to be sympathetic to Apple and other company’s plight, Congress is interested in only one thing, and that is opportunities they can exploit to make them appear as if they are solving problems that they ironically created.