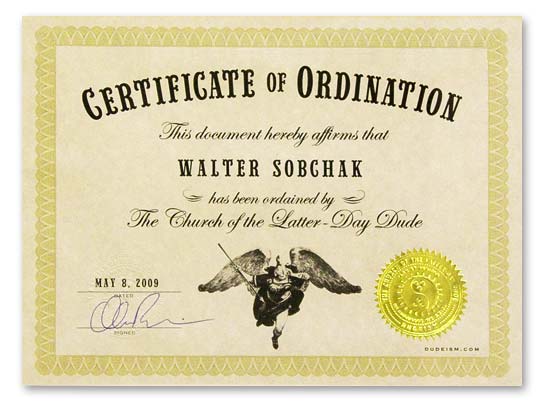 Certificate of Ordination from the Church of Latter Day Dude

Dudeism has only recently been organized as a religion, however it has existed down through the ages in many forms. The earliest form of Dudeism was the original Chinese Taoism, before it went all weird with magic tricks and body fluids. The head dude of Taoism, if he actually did exist, was Lao Tzu, the author of the Toa Te Ching, which basically said “smoke ‘em if you got ‘em” and “mellow out, man,” although he said this in ancient Chinese so something may have been lost in translation.

Down through the ages, this “rebel shrug” has fortified many successful creeds – Buddhism, Christianity, Sufism, John Lennonism and Fo’-Shizzle-my-Nizzlism. I am currently a Zen Buddhist as well.

The idea is this: Life is short and complicated and nobody knows what to do about it. So don’t do anything about it. Just take it easy, man. Stop worrying so much whether you’ll make it into the finals. Kick back with some friends and some oat soda and whether you roll strikes or gutters, do your best to be true to yourself and others – that is to say, abide.

Incidentally, the term “dude” commonly refers to both genders. Most linguists contend that “Dudette” is not in keeping with the parlance of our times.

As an ordained Dudeist Priest, I can minister over religious ceremonies in most U.S. States (laws may vary), and assorted other countries. I can preside over a wedding, funeral, or any kind of celebration. So, if you are in need of comfort, please    don’t hesitate to call on me and I will abide.

You can verify my official dudeist status here.

By the way, dudeists prefer Macs. An iPhone app is in the works.