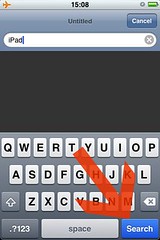 It’s becoming increasingly clear that Apple’s main rival is not Microsoft, but Google. The Nexus One competes directly with the iPhone; Apple is allowing Google to use Lala, for now; and with Apple’s purchase of Quattro Wireless and Google’s acquisition of AdMob it seems each company is gearing to directly compete with the other in the mobile ad market. “Apple and Google know the other is their primary enemy. Microsoft is now a pawn in that battle,” says one of BusinessWeek‘s sources who is familiar with the matter.

But this isn’t just about Apple and Google. As the BusinessWeek article points out, clinching the coveted default spot on the iPhone would also help Bing gain market share in the quickly growing area of mobile search. 86% of mobile searches belonged to Google in November, according to the Nielsen Co. Only 11% belonged to Bing.

For myself, I really like Bing. It took me a while to get used to it, but I think it has many advantages over Google, particularly the was it displays image search results. Microsoft also has a great Bing iPhone app [iTunes] that I find myself using more and more.

While the Bing discussions have been going on for weeks, the source notes that the search switch may never materialize. Interestingly, the article also states that Microsoft may also be lobbying to make Bing an alternative on Apple’s Safari browser for Mac users. Despite this, even if the Bing deal goes through, it may not last long. BusinessWeek‘s source says Apple has a “skunk works” looking at a search offering of its own, and believes that “if Apple does do a search deal with Microsoft, it’s about buying itself time.” In other words, Apple sees search in its future.

TUAWRumor: Bing to be default search engine in iPhone OS 4.0? originally appeared on The Unofficial Apple Weblog (TUAW) on Wed, 20 Jan 2010 08:30:00 EST. Please see our terms for use of feeds.